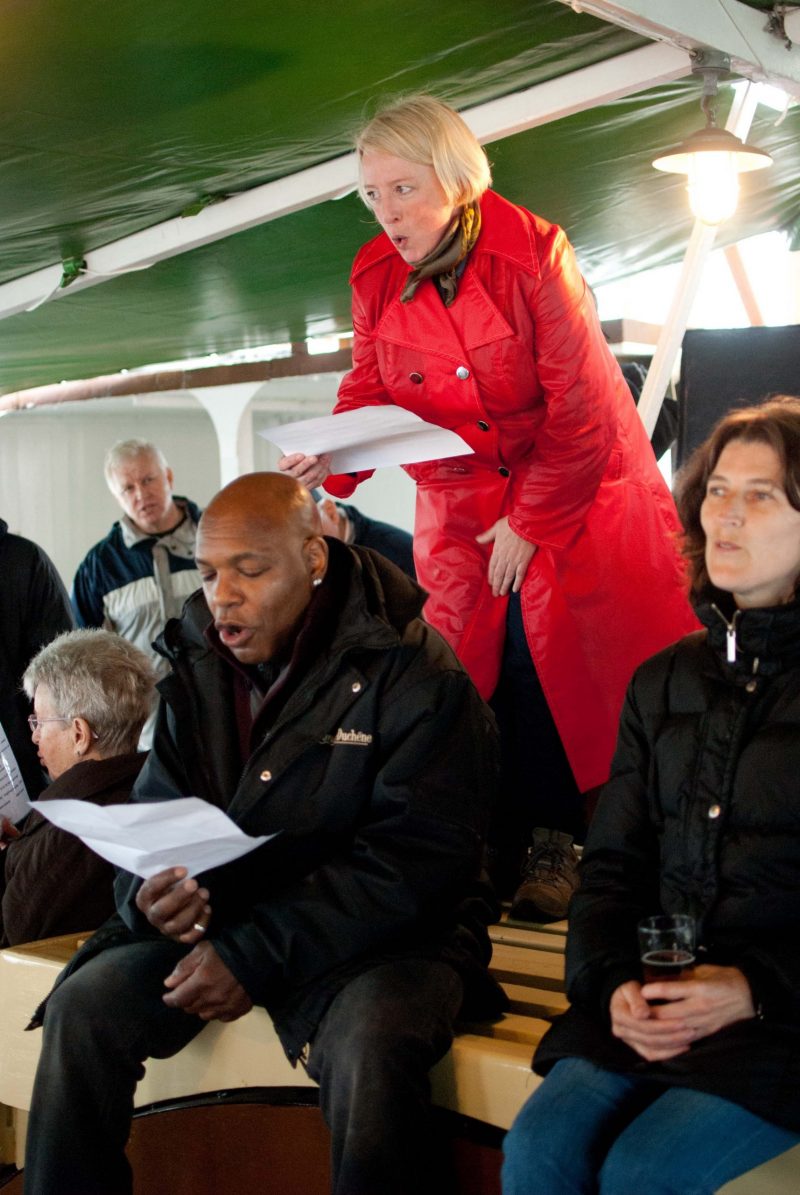 Which sound/s define the here and now of your day to day?

This blog has a main title ‘The pontoon only squeaks at high tide’, it refers directly to the soundscape by my riverside studio in Medway, UK. It’s the working title for a longer term body of work I’ll make with individual women who live by different bodies of water, asking them to identify and describe what sounds define the here and now of their day to day. I’m keen that the work will be outward looking and encompass women from different countries, cultures and types of water environment. It was something I intended to explore during my Sura Medura residency, I thought it had taken a back seat until I realised it had been bubbling along under the surface all the time, just not in the way I had thought it might! Originally I said I’d connect with women in the fishing community but the flow took me away from the sea to the lagoon and paddy instead.

I spent time with Mangalika who lives on a hill that rises @1km inland up the jungle road, featured in the binaural recording I made in Hikkaduwa for my Sura Medura Blog 2. Her tropical garden, full of banana & coconut palms, flowers, vegetables and birds, slopes steeply down to a uncultivated paddy land behind. ‘Paddy’ is essentially a man made wetland ¹. This paddy has grazing cattle tethered along it, with their constant egret companions, and the occasional vegetable plot, in places it’s lumpy to walk on with sudden invisible dips reminiscent of a bog especially after heavy rain.

Over a few visits with Mangalika sharing photos, drinking vanilla tea talking about family, life, friendship and loss we began listening together. We exchanged the unique-nesses in our home soundscapes and which particular sounds describe or define their here and now.

When I asked Mangalika what her definitive sound of home is she chose a sound I hadn’t yet heard.. the call of peacocks. (aka Indian Pea Fowl ²) They roost in the tall palms, fly up on her roof and feed along the paddy. She immediately took me for one of several barefoot walks along the paddy listening for peacocks. This began a search, verging on obsession, that evolved from being a search for Mangalika’s personal sound into involving everyone I met in Hikkaduwa who all gave me tips for where best to hear them call and at what time of day. Some say dawn is best, but not too early or too late, others dusk, Aruni found them in her paddy-side garden at 3pm one day. I followed all the tips and directions, some brought peacocks, they all brought wonders of everyday magic. Walks before sunrise watching the Flying Foxes long slow glide flap to their roosts, a porcupine snuffling across the road into the trees, monks chanting in temples, the volume of layer upon layer of insect and bird dawn choruses, women carrying flowers to shrines, the distinct sound of morning sweeping. Dusk visits to Aruni’s garden and Tuk Tuk rides with Rasika as the light faded were full of shared hushed excitement, exchange of latest sightings with neighbours and conversation about the local topography.

This process of looking for peacocks also began to resolve some ideas I’d had about traveling sound, call and response and how to make live sound performance using a megaphone and Sudu’s TukTuk sound system. I’ll talk about this in the next blog…

¹ It’s estimated that Sri Lanka has possibly the highest number of man-made water bodies in the world with an estimated total of more than 10,000 Wewas (tanks) countrywide. Linked to these tanks are many kilometers of canal systems and thousands of hectares of cultivated and uncultivated paddy fields. http://trip2lanka.com/2017/05/wetlands-and-marshlands-in-sri-lanka/

² Peacocks are common and much loved, their numbers are increasing in Sri Lanka. Like in the UK it’s unlucky to bring the feathers inside your home. The Raksha mask theatre culture Kolam Dance includes a Peacock mask meant to bring peace, harmony and prosperity.

The ceaseless wave energy and sound of the Indian Ocean surf here at Sun Beach, Hikkaduwa can energise and overwhelm the senses. For surfers it is a big draw.

To face and process all this sensory input I’ve begun a series of dawn performances on the beach looking out to sea. I use a megaphone to amplify my voice in an attempt to meet the volume of the sea;  reading a combination of excerpts borrowed from John Berger – Confabulations *(JB), Moya Cannon – Carrying the Songs *(MC) combined with my own sparser words and breathy wave vocalisations. The texts refer to language, the nature of translation, pre-verbal language, mother tongues, sound, the sea and loss. The text evolves with each iteration, I strip the language back each time as I find my own words and let go of European writers, to explore Sri Lankan poets/ writers in English and slowly phonetically find individual words in Sinhala .  Performing alone in this way is a new method of developing work, for me.  Not a comfortable one to begin with but with repetition it has evolved into a method I will take home and continue.

As the beach wakes up accidental audiences pass through my field of sound. Sometimes the feral cannine posse will show up and settle in for the ‘show’.

“True translation is not a binary affair between two languages but a triangular affair. The third point of the triangle being what lay behind the words of the original text before it was written. True translation demands a return to the pre-verbal” (JB)

“A spoken language is a body, a living creature, whose physiognomy is verbal and whose functions are linguistic. And this creatures home is the inarticulate as well as the articulate.” (JB)

“Consider the term Mother Tongue.. [the woman in Ruwan’s Studio asked ‘is English your mother language?’] ..Mother Tongue is our first language, first heard as infants from the mouths of our mothers. Hence the logic of the term.

I mention it now because the creature of the language, which I am trying to describe, is undoubtedly feminine.” (JB)

They comfort and disturb the clay part of the heart.” (MC)

overwhelms the heart, in spring or winter.

Surfacing from a fading language,

the word comes when needed.

A dark sound surges and ebbs,

its accuracy steadying the heart.

stirrings of a thousand different springs.

There are small unassailable words

territories of the voice

that intimate across death and generation

how a secret was imparted –

when a vowel was caught

between a strong and a tender consonant,

when someone in anguish

made a new and mortal sound

that lived until now,

to waves succumbed to

with the suck and push

the swell and hiss

Walk in a straight line from the Hikkaduwa Sea Side to the Jungle and you’ll pass through at least 6 distinct sound zones which seem to exist in horizontal planes parallel to the sea. Wave energy generated way out in the ocean meeting the reef, rising as surf, darkens, curls & disintegrates as froth in trains of 3s, 5s & 7s. The beach a constant state of flux as sand is pulled back, lifted up, shifted and dumped. The complex roar and hiss sea side overwhelms everything until it’s funnelled through the alleys and corridors of hotels and beach bars to meet the equally unstoppable traffic of the Galle Road. Time it right and your dash across will be rewarded with an uproarious chorus of hooters as you enter the Jungle road, cross the train track and head up to the jungle. Listen to the link to take this binaural walk, best heard with headphones. Perhaps listen while you stroll somewhere, it lasts @25 mins. Occasionally you’ll feel a slight flutter of warm wind in your ears and the brief distorted surprise of a west-east express train. I recorded the day after a huge tropical storm which had washed the roads and paths with more gritty sand than usual so you’ll hear my feet and the feet of passing people as you go.

Surf-Beach-Road-Rail-Jungle run closely parallel, sounds elide & crash into each other changing rhythm over the day.. all except the ceaseless push, suck, hiss-roar of the Indian Ocean rip-rolling in over the reef too close to the equator to have much differentiation of tide. Hooters rule the road, Truck and Bus BAAHHP-HOHHNNK – trump Tuk Tuk ‘tuuhooT – trumps scooter ‘bah-tuot – trumps cyclist ‘TiiHnG’tiHng – trumps pedestrian. Past these the lagoon and jungle soundscape opens up for voices.